It was the great American architect Louis Sullivan who, in 1896, first articulated the principle that “form follows function.” Over the decades, designers from both near and far have knelt at this altar and, within the parameters of their work, have given due homage to this aesthetic credo.

I have long believed that Italian designers have taken Sullivan’s maxim a step further: As critical as functionality is, they also insist that the finished rendition be beautiful. A Pininfarina designed Ferrari 365 GTB/4 stirs the soul as much through its curvaceous lines as it does through its heart-pounding, V-12-propelled performance.

It’s one thing to simply improve upon an existing product. The real trick, however, is to fashion something truly innovative, a product whose benefits both surprise and amaze. It is the search, if you will, to create the “Aha” customer moment.

Franco Negrini had, at an early age, the benefit of being one helluva of a good clay target shooter as well as being one heck of a good seat-of-the-pants inventor. Traveling to trap tournaments around the world, he found that the heavy and clunky gun cases of the time did not stand up well to the rough and tumble of airline travel. For a man who was passionate about his sport and the shotgun that made his success possible, this was unacceptable. 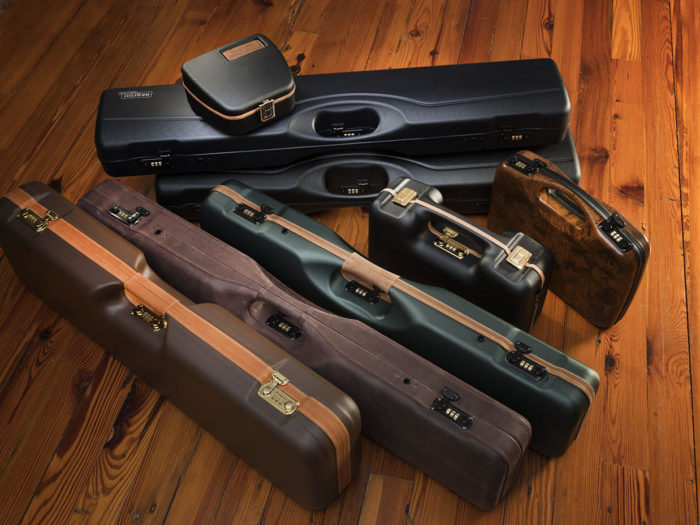 Negrini’s compact travel cases for shotguns, rifles, handguns, eyewear, and accessories are available in a wide variety of Old-World Hand finishing with the best quality Italian leather and fabric.

Instead of simply trying to beef up a style of gun case already on the market, Negrini started with a clean sheet of paper. The result was his invention of a thermal forming method for plastic that contained a high percentage of shock-resistant rubber.

Next, with financial help from his friends at Perazzi, came the development of machinery that could produce thermoplastic cases and the introduction in 1981 of the first ABS gun cases on the market.

In one fell swoop, Franco Negrini revolutionized the gun case market for traveling sportsmen and sportswomen. Here was a case that was, at once, exceptionally strong and shock resistant yet was ultra-lightweight and of a compact and uniquely sleek design. It was a contradiction in terms, but a delightful one at that. An “Aha” moment, indeed.

Over the years, the factory has added a wide range of tasteful touches to their cases, including hand-selected premium leather as an interior liner and an exterior cover. Bellissima! Today, Negrini cases are one of those rare products where utility and elegance truly go hand-in-hand. They create luxury cases that are light in weight yet fully pass air-travel certification.

Some months back, I had the opportunity to visit the Negrini factory in the small town of Questello in Northern Italy. In this bucolic setting, you might well expect that the campus- like surroundings house a large winery. Instead, the buildings here contain an array of high-tech manufacturing machines and a dedicated workforce that has made Negrini one of the largest producers of gun cases in the world, supplying many of the top shotgun manufacturers in both Europe and the U.S. with original equipment cases.

Negrini began and continues today as a family business, including founder Franco Negrini, his sons, Romano and Graziano and daughter, Elisabetta. I began my visit with having lunch with Elisabetta at an old country home that had been converted to an inn and restaurant. The local specialty in this part of the Lombardy region is a ravioli stuffed with a pumpkin puree. Unusual, but absolutely delicious, followed by a cheese tray highlighted by a local parmesan and a delightfully dry regional white wine.

Negrini’s secret sauce, for their gun cases, that is, is their patented ABS (Acrylonitrile Butadiene Styrene) technology with a multi-layer construction that results in two outer and two inner cases sonically welded together— essentially four cases in one. The result? Maximum strength and impact resistance with a minimum of weight.

Negrini maintains its claim of making the lightest airline-approved gun cases with TSA-accepted locks. The company notes that its cases are up to 65 percent lighter than most aluminum models.

The company’s cases include built-in combination locks located in recessed areas to help avoid snagging and dings during travel. Steel hinges are used throughout and riveted to the case.

Recognizing that moisture is a gun’s number one enemy, the company uses no wood in any part of construction and avoids the use of any potentially corrosive materials or bonding agents. Gluing the fabric to the foam polyester on the cover, for example, is made with a solvent-free, thermo-set rubber cement and natural resins.

Negrini hard gun cases are finished with plush, padded interiors and are now available in a variety of trim levels. One of my favorite models is their uplander ultra-compact shotgun case specifically designed for small bore over-under or side-by-side guns with barrels up to 30 inches. This case tips the scales at only 5.7 pounds, yet it’s approved for air travel. It also includes a patent-pending, hand-detachable sling system that allows for hands-free carry.

At the other end of the shotgun spectrum is their luxury dual convertible gun luggage, a case that easily accommodates two shotguns of any action type. Both cases are available in a variety of trim levels.

Negrini has many other case models that run the gamut of any smoothbore hunter’s or clay target shooter’s needs. It has now also expanded its line of cases to models for rifles, handguns and air guns. Their eyewear case is a nifty new accessory, a safe haven for those expensive shooting glasses.

Not unlike high-end Italian firearms manufacturers, Negrini has successfully married cutting-edge manufacturing techniques with Old World craftsmanship and expert handwork to create a product that, while utilitarian in purpose, is elegantly designed and exquisitely finished.

It is interesting to note that Louis Sullivan attributed the core idea of his “form follows function” concept to an architect named Marcus Vitruvius Pollio who asserted that any structure must at once be solid, useful and beautiful. It should come as no surprise that Marcus Vitruvius hailed from ancient Rome.

In 2012, the Negrini’s formed a U.S. distribution partnership with Stephen Lamboy and Dr. Elena Micheli, two well-known professionals in the fine gun industry. Working together with the Negrini family, they have helped design many new lightweight luxury cases specifically for the needs of

American wing and clays shooters. The new Compact Clays series for competition and Gun Luggage series for wingshooters are in great demand and have raised eyebrows among shooters who travel by air or use them in their car, club or home. For the serious handgun collector and shooter, Negrini has several new designs tailored to 1911s and GLOCK owners needing the strength and security of steel combination locks.